'We feel the pain of his absence', says Padma Shri awardee's daughter

Bengaluru, Jan 26 (IANS): "We are happy that our father is being conferred with the Padma Shri award. We feel the pain of his absence at this moment. He lived for the society and wrote for the society," says Manasa, daughter of Kannada litterateur Late Siddalingaiah who has been awarded Padma Shri this year for his contribution to literature and education.

"People have loved him and now the government has recognized it," she said. 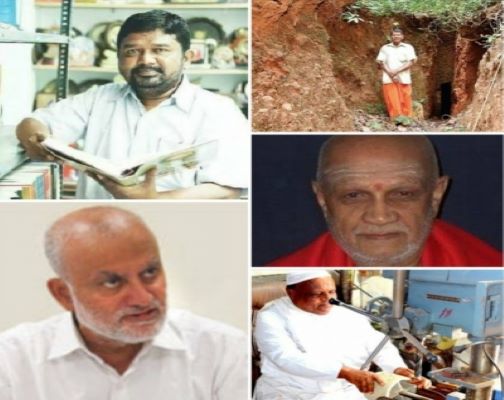 Siddalingaiah ushered a new lease of life into Dalit movement in the state through his literature. His poems went on to become anthems of Dalit activism and they continue to be voices of the oppressed in the society. Siddalingaiah died due to Covid related complications in June. He is one of the founding members of Dalith Sangharsha Samithi (DSS).

Amai Mahalinga Naik, another achiever to be conferred with Padma Shri from the state, said, "four years ago when I started digging atop a hill for water source, people laughed at me and chided that how will I find water source there while it is not found on ground. I made up my mind to dig a tunnel despite what people said in the name of god. I got the water as well as a national award. I am happy."

Mahalinga Naika is from Amai of Dakshina Kannada district of Karnataka. He has constructed seven tunnels atop a hill and transformed two-acre barren land gifted by his landlord into a lush farm. His endeavour has been telecast in the 'Water Warrior' series on Doordarshan. Since he had to earn his bread every day, Mahalinga Naik used to go to work for half day and for another half day and during night he dug 25 to 30 meter long seven tunnels single-handedly.

Dr S. Ayyappan, who has been conferred Padma Shri for his significant contributions to National Agricultural Research System, stated he is grateful for the recognition to a man coming from a humble village background. He underlined that the award will also go to farmers and scientists who worked with him.

Ayyappan is a former secretary in the department of agricultural research and education and director general of Indian Council of Agricultural Research. His research fields included fisheries, freshwater aquaculture and aquatic microbiology.

Hosahalli Keshavamurthy, a popular exponent of Gamaka (a mix of narration and singing in music) who has been conferred the award says, it is a recognition to the 'Gamaka art form'. This art form should evolve further. This award should enable the growth of Gamaka art form, he reiterated. Keshavamurthy has popularized this age-old art through concerts and trained over 1,000 pupils to get the title 'Gamaka Gana Gandharva'. Through his sustained efforts, the government established Gamaka Kala Parishath.

Another Padma Shri awardee from the state, Abdul Khadhar Imamasaaba Nadakattin is popularly known as 'Nadakattina Sahebru' for inventing 24 agricultural equipment to augment farmers. He has established Vishvashanthi Agricultural Research and Industrial Development Centre in Annigeri village and provided employment to more than 40 people. The centre exports its products to various states across the country. Abdul Khadhar Imamasaaba Nadakattin has also been conferred lifetime achievement award in 2015 by the President of India.

Title: 'We feel the pain of his absence', says Padma Shri awardee's daughter