Mangaluru, Aug 5: The demand for old newspapers and scrap paper has risen in the market. While old newspapers are being bought at up to Rs 26 a kilo, the price is likely to go up further.

Last year, old newspapers were bought at Rs 12 to 15 a kilo which has now doubled. While households are carefully staking up old newspapers at home, scrap vendors have become equally careful in keeping the scrap paper intact. 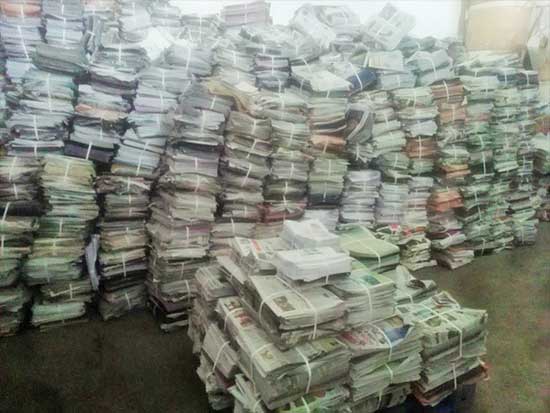 The price of imported white newsprint was available at Rs 35 a kilo about seven to eight months back but its price has now zoomed to Rs 80 a kilo after scaling a high of Rs 90 a kilo. It is said that as the price of newsprint has zoomed, its scrap value has also risen.

Due to the ongoing Russia-Ukraine war, the import of Chinese newsprint has decreased. With the demand rising, paper mills have hiked the price of newsprint resulting in higher cover price of English newspapers due to which the scrap value of paper has also risen.

Scrap vendors buy old newspapers from newspaper offices at Rs 25-26 a kilo and sell it Rs 2-3 higher and at another Re 1 higher price when it is sold to paper mills. The mills recycle the paper and sell it again in the market at Rs 60 a kilo as it is not of superior quality.

Earlier, old English newspapers were bought at a higher price by the scrap paper vendors than the Kannada newspapers. But now, the vendors buy all the newspaper scrap at the same price. The price is decided based on the thickness, quantity and quality.

Nowadays, scrap papers are being collected and bought from homes and offices by a few companies through an online process and at a pre-determined price.

The price of newsprint is on the rise with the Indian currency plummeting to new lows and the higher price of commodities. Also, the ban of single use of plastic has pushed up the prices of paper which is now used as a packing material at several shops and establishments.