Udupi, Aug 17: The Social Democratic Party of India (SDPI) Udupi condemned the putting up of a banner at Brahmagiri circle and demanded that the police officials remove it with immediate effect.

Addressing a press conference on the ongoing banner issue in Udupi, Shahid Ali, SDPI Udupi vice President said, “India is a secular country. Peace prevailed in Karnataka state for a long time. But recently few incidents of communal disharmony have occured in state. Unfortunately what happens in UP, Rajasthan is repeating in Karnataka now.  Udupi has become a centre for communal issues. First it was the hija issue and now a banner. A banner stating “Hindu Rashtra” has been put up in Brahmagiri circle. India is a secular country, ruled as per the Constitution.  All our politicians including  those of BJP and Congress take oath on the Constitution. Hindu Rashtra is a concept of RSS. It is a conspiracy to attract Hindus and divide them from other communities.  Swami Vivekananda and Gandhi were also Hindus but they never propagated  the concept of Hindu nation,” he said. 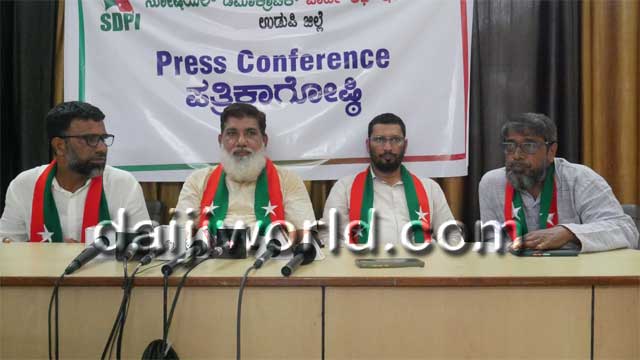 “Hindu Rashtra is a concept which intends to gain votes and not all Hindus will benefit from this. In the last eight years of this government, highest numbers of Hindu youths have committed suicide due to unemployment. Hindus are in trouble in Hindu Rashtra. Hindu Rashtra means Manusmrithi nation. It intends to  divide the nation on the basis of caste  and they are ruled by Brahmins.  Few Brahmins have kept this nation in their fist. No Muslims should bother about these things. We have our Constitution and police department. I request the police department to remove this banner and solve the issue, failing which the SDPI will stage a protest in front of the DC office,” he  added.

“We don’t have much opposition towards the Savarkar photo in the banner. In schools, we had Gandhi, Nehru and Azad pictures only. The present government is just wishing to popularize its leaders. That’s all,” Shahid Ali said.

Speaking  about the postal stamp released by Indira Gandhi of Veer Savarkar, Shahid Ali said, “Indira Gandhi was a great leader. She divided Pakistan into two. We were facing threats from both the ends when Pakistan was unified. But by supporting the cause of Bangladesh, Indira Gandhi upheld the Indian pride. She has been a martyr and I would not like to comment furthermore on her,” Shahid said.

SDPI Udupi office bearers were present on the occasion.