Mangaluru, Apr 11: Sri Sri Swasthisri Charukeerthi Bhattaraka Pandithacharayavariya Swamiji of Jain Math, Moodbidri is a well-known spiritual figure among all communities. He has organised many religious meets and Savardharama Sammelanas. He has also attended the Parliament of World's Religions four times, and travelled to various countries preaching principles of non-violence and peace. Swamiji has inspired several devotees through his spiritual preachings. 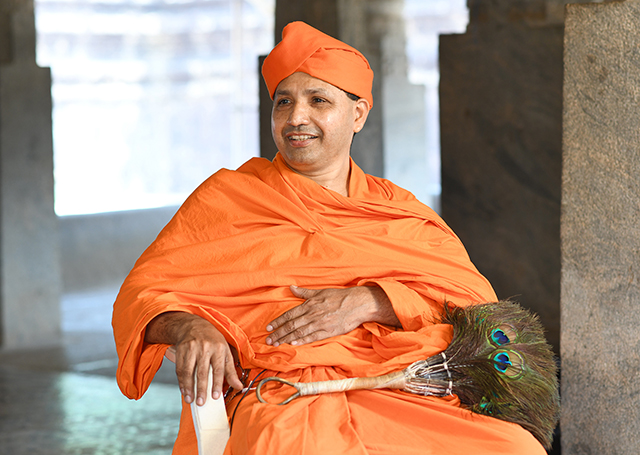 Swamiji: Kasargod, Udupi, and Dakshina Kannada have been collectively identified as 'Tulu Nadu'. British used to call it South Canara. Moodbidri is one of the most prominent among 32 towns. Around 2,700 years ago, 'Samavasarana' of the 23rd Tirthankara Parshwanatha had come here. Another saint Parshwa Muni started penance and near Nagasaravora and attained 'Mokasha'.

In 3 BC, Chandragupta Maurya in his tour of Jain temples of the south had visited this place also. He was accompanied by 12,000 munis from Rajasthan, Gujarath, Uttar Pradesh Maharashtra, and Kashmir, after which, the Jains of north and south united here. In the year 1021, in Shravanabelagola there was a saint called Pandithacharayavariya Maha Swami, who was well-known for Ayurveda. He saved a Hoysala king Ballalaraya from sickness, after which the king gave him the title of 'Charukeerthi'. Later, he came to Nallur where he started the Math. Soon he came to Moodbidri and established a Math here. People urged him to stay here. The great scriptures of Jains like 'Dwadashanaga', 'Davala', 'Jaidavala', 'Mahabanda' are in Moodbidri.

Q: We have heard that there are 18 Basadis in Moodbidri and you are head of these Basadis. Can explain the programmes undertaken at these 18 Basadis?

Swamiji: Yes, there are 18 Basadis. Usually, the human being has 18 forms of sins and 18 forms of virtue. This is the concept used in building the 18 Basadis. There is a concept that for an individual to come out from all these 18 sins, they should visit all these 18 Basadis. From Kashmir to Kanyakumari, there is one Jain temple every 40 kilometres.

Q: Swamiji, what is the difference between Jain munis and swamis?

Swamiji: Monastic practice of neither possessing nor wearing any clothes is Digambara. Bhattaraka means ahead of king, a head of the Math who lives his life for purpose of the community. Bhattaraka is a bridge between 'Muni' and a 'Samsari'. One who unites munis and samsaris is Bhattaraka. 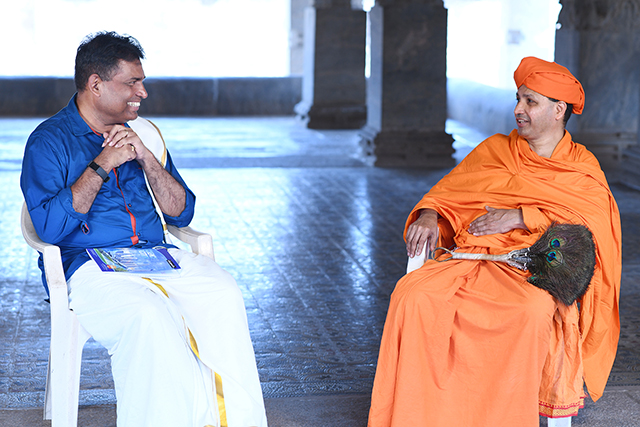 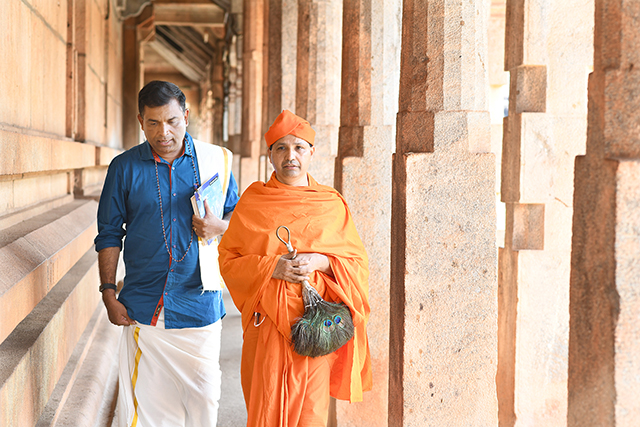 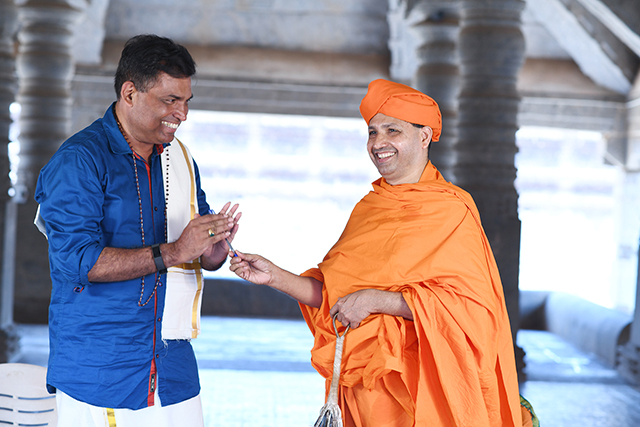 Q: Swamiji, can describe your Purvashrama?

Swamiji: I was born in 1970. In 1930, my grandfather had started a school in Summa, Karkala. In 1800 there was a school built by protestants, the Dedimberi school. It is the oldest school in the district. My forefathers used to go to this school. Later my schooling took place in Summa school that was started by forefathers. In 1906, our family member Summa Shankar Hegde started this school. My forefathers were in astrology and agriculture. Summa Guthu was a big family which belongs to the Byaravarasu period of 900 years ago. This house belongs to the Hegde clan which has a connection with many 'Beedu' and 'Guttu' houses. I started to read newspapers at a young age. Along with others, I used to write poems. I grew up among people belonging to different faiths, community, and religion. I completed my degree and got a job in the Indian Market Research Bureau.

Q: How many children did your parents have?

Swamiji: We were five brothers. My brothers did their education in Andelu in Moodbidri. I grew up in a disciplined household. I had an interest in reading, Yakshagana, drawing, music and swimming.

Q: Who inspired you to become a saint?

Swamiji: In my childhood, I was told that the ultimate aim of life is to attain 'Moksha'. When I heard religious preaching, I gradually began to seek the truth.

Q: In which year did you obtain 'Deekshe'?

Swamiji: During my high school life, I was inspired by spirituality. The preaching of Shravanabelagola Swamiji and the lifestyle of Dr D Veerendra Heggade inspired me. Later, I joined Karkala Math. During weekends, I used to visit the Shravanabelagola. In October 1988, I was given 'Sathamprathimadari', later I was sent to Vijayapura. I organised saint meets, all-religion meets, acquainted myself with several saints, participated in the Parliament of World's Religions and took part in many other religious events along with Pejwar seer. Spirituality means that which projects humanity in a person. Spirituality unveils the real truth. The anointment or 'Pattabisheka' took place in August 1999.

Swamiji: Usually saints have painful experiences, but a saint should not speak about it as an unpleasant experience, because the life of a saint is to give happiness to the people and to heal sadness.

Q: What is your message to our readers?

Swamiji: Be in touch with people with abundant knowledge. Help people who suffer from problems or ones in need.