Mangaluru, Jul 19: “Yediyurappa is like the soul of our party. Eshwarappa and Jagadish Shettar are like the two eyes,” said Nalin Kumar Kateel, state BJP president.

Speaking to the media Nalin said, “I do not have any connection with the said audio. I will write a letter to the CM today itself to order an inquiry into the matter. Let truth come out through investigation. Many cases of this kind also occurred in the past. This is not right. So investigation has to be done.

“We do not have any discussion with regards to the change of leadership. This matter is irrelevant. Yediyurappa is like the soul of our party. He has fought for more than 10 years and built the party to such a level. Eshwarappa and Jagadish Shettar are like the two eyes of our party. Due to the guidance by these seniors, the party and government is running well. So this kind of discussions are not held in our party. 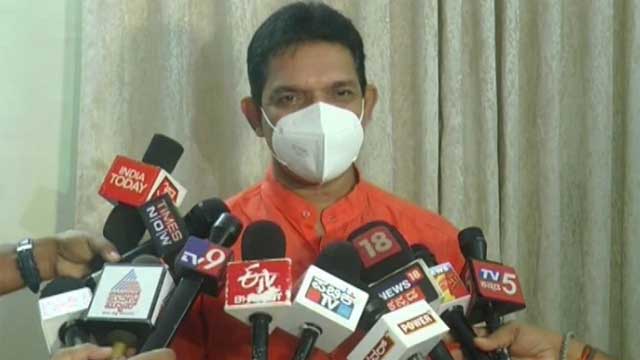 “I will not express suspicion on anyone without investigation of this matter. Truth will come out. I am going to Delhi today as parliament session is there. I will also cooperate with the investigation,” he said.

It may be recalled, an audio clip said to be containing BJP state chief, Nalin Kumar Kateel's voice, claiming that the new chief minister (CM) will come from New Delhi had created ripples in the political circles. However, Kateel had clarified that this audio is fake.

On Sunday night, an audio which reportedly contained Kateel's conversation at around 9.15 pm, was circulated in the social websites. The audio, which was in Tulu language, contained information that changing of the chief minister was imminent and dropping of some senior ministers like Jagadish Shettar and K S Eshwarappa to build a new team was under way.

Two hours after the audio became viral, Kateel clarified that the audio was fake. He said that this is an attempt to sully his image. He demanded an investigation about the audio. "Miscreants who mimicked my voice, circulated the audio through WhatsApp. He said an inquiry should be conducted about the genuineness of the audio and felt that the purpose of the people concerned was to damage the standing of the government and the party. He requested Yediyurappa to find the culprits behind this video,” he said.