Udupi: BJP assured me nothing, will serve as party worker – Pramod Madhwaraj

Udupi, May 10: “I have not placed any demands with BJP leaders. They have not given me any assurance as of now. I will work as a common party worker for the 2023 state assembly elections and make my humble contribution to the party in securing 150 seats,” said former minister Pramod Madhwaraj who has recently joined BJP.

Speaking to media, Pramod said, “Wherever the party asks me to work in Karnataka, I will work. I have conveyed it to the top brasses of the party that I will ensure that a BJP candidate wins in areas dominated by fishermen."

“In 2018, I had decided to join BJP. But that would have been cheating. When I was a minister then, the BJP had given me an offer. Now I am not in any post and I am not an elected representative. So anti-defection bill does not apply on me. I have taken this decision independently," he added. 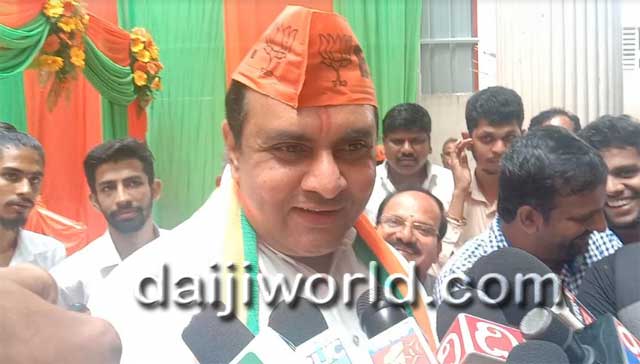 “In my resignation letter also I have mentioned this. I have worked for the Congress and the party has also given me gifts. I have taken this decision as I was feeling suffocated in Congress party of Udupi district for the past three years and the leaders of the party did not pay heed to my woes. Except that there is no connection between the old video that is being made viral now and my decision", Pramod clarified.

“In 1978, Veerendra Patil contested against former PM Indira Gandhi and ridiculed her also. Within two years, he was industrial minister in her cabinet. These things are common in politics. Is it possible to gratify ruling party being in opposition? They should understand the correctness of releasing that video now," he added.

“Many of my supporters are ready to join BJP. But at booth level in rural areas there are workers who are the strength of BJP. Their consent has to be taken. We will take the opinion of local leaders and MLA in this matter," Madhwaraj explained.

“I am not interested in any national politics. My intention is to be with village politics,” he said.

When asked about Congress workers opposing Pramod joining BJP, he said, “It is natural for the party workers to feel emotional when a person leaves a party after serving for a long time. I have not felt inflated when someone praised me. Likewise I will not feel depressed when people talk ill of me,” Pramod said.

Title: Udupi: BJP assured me nothing, will serve as party worker – Pramod Madhwaraj