New Delhi, Nov 13 (IANS): Strong anti-incumbency because of a continuous 15-year rule and the poor state of civic amenities including sanitation, education and health in most wards of Delhi may be against the BJP which is putting in all its efforts to retain power in the municipal bodies polls. However, strong organizational support coupled with the face of Prime Minister Narendra Modi may give the party the necessary edge over its rival Aam Aadmi Party. 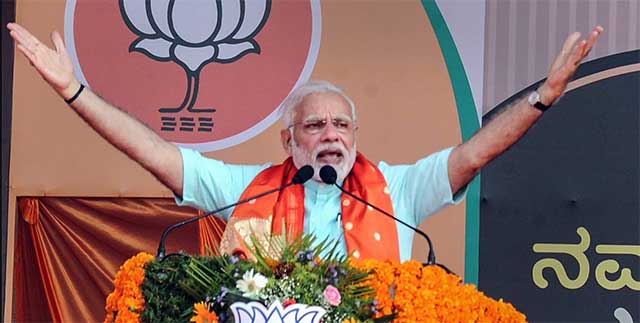 The BJP has been ruling over the municipal bodies of Delhi for the last 15 years. The saffron party in the last MCD election in 2017, got a massive two-thirds majority, completed a hat-trick and also increased its seat tally from 138 in 2012 to 181 in 2017.

The anti-incumbency factor looms large this time against the BJP. But anti-incumbency is not the only factor that goes against the saffron party. Despite being in power for so many years in the municipal bodies in Delhi, the party hardly has a local impactful face to lead with. It is still dependent upon the Central leadership and the Prime Minister in this regard.

On the other side, the Aam Aadmi Party (AAP) led by Arvind Kejriwal is contesting aggressively and has put in all its efforts for electoral success. The AAP entered the MCD elections for the first time in the 2017 polls and won 49 wards. Even as it did not win the polls, it managed to replace the Congress, which won only 31 wards, as the main opposition.

Speaking to IANS, Delhi BJP's spokesperson Harish Khurana said that last time also there were allegations of anti-incumbency but the BJP has done progressively well and won with a majority. This time also we will win with a majority.

Along with no strong face, people are reportedly unhappy with some of the BJP's sitting MCD councillors and the party is facing a strong backlash.

On a more optimistic note, the BJP has more strong points to win this election. The Delhi BJP has the hand of PM Modi who is acceptable everywhere in the country.

Being the largest party, the BJP has a full army of workers who can reach every house for campaigning and connecting.

Another big move by the Delhi BJP ahead of the MCD election was the allotment of EWS flats. This will help the party to gain people's support.

Harish Khurana told IANS, "we have power of both our work report and our workers. We will definitely win for the 4th time in the MCD."

"The major point is we have done the work even during the Covid time when lots of people were sitting at home including Delhi Chief Minister Arvind Kejriwal. MCD workers were on the roads and collecting garbage from houses, cleaning up the roads and streets and that is our core strength."

"For the landfill site Arvind Kejriwal is saying they will get experts from Paris. He is still figuring out but we have already started working on the site which has reduced by 18 metres and by 2024 we will manage the whole landfill site", he added.

"Look at our smart school, dispensaries, open gyms, digitalisation etc. Arvind Kejriwal has only one dispensary for women and we have 123 working dispensaries for women."